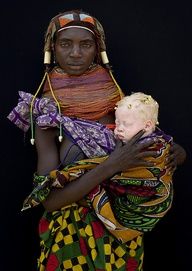 In Tanzanian tradition, people often visit a witch doctor who, as you have probably already guessed, is a ‘doctor’ who ‘heals’ ‘possessed’ people. People will visit this doctor even for simple colds because any sort of sickness is viewed by some as some sort of sinister sorcery.

You can often tell who has been to a witch doctor as the witch doctor often makes a scar on the person’s face as part of the ritual. The fact that a lot more people have such scars in the villages rather than in the cities perhaps reflects the dramatically poor health and general education there is in rural areas.

I think that the reason why I cannot overlook this tradition in a light-hearted way is because a significant portion of witch doctors are behind the murders of people suffering of Albinism.

Albinism is a condition where a genetic mutation impairs melatonin secretion, which is the substance responsible for skin, hair and iris colour, leaving the sufferer with bleached white hair, the whitest skin shade that exists and red iris (the iris of the eye is red because it lacks its own pigment and therefore only reflects the colour of the blood vessels inside the eye).

Albinism is particularly prevalent in Tanzania with 1 in 1,400 affected compared to 1 in 20,000 in Western countries.

People suffering of albinism in Africa of course stand out a lot more than corresponding sufferers in countries with white populations, and thus suffer more of social stigma. Another reason why they experience more stigma is because suffering of Albinism is often seen as being ‘possessed’; there is no interpretation of what Albinism entails in true medical context at all. As a result, a lot of people suffering of albinism often visit or are sent to the witch doctors which will often proceed to sacrifice these people because they are ‘evil’ and shaming Tanzania. Some of the witch doctors even keep or sell some of the victims’ body parts as they are viewed (once again because of the white colour) to be something that brings luck and privilege. And the most shocking of all is that victims of this practice can be as young as 1 year old.

Since skin colour is determined by simply what levels of melatonin one has, I cannot understand in any way or any context WHY merely the melatonin levels produced by one can have such a determining factor in his/her life.

This is a text widget. The Text Widget allows you to add text or HTML to your sidebar. You can use a text widget to display text, links, images, HTML, or a combination of these. Edit them in the Widget section of the Customizer.
%d bloggers like this: